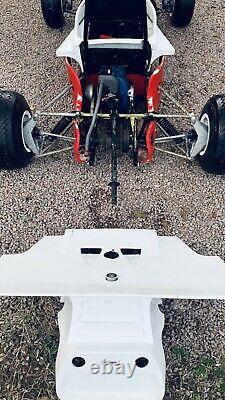 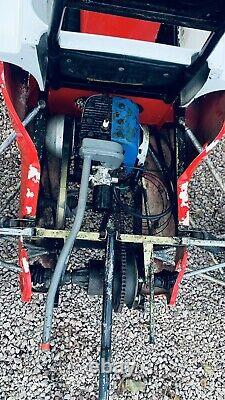 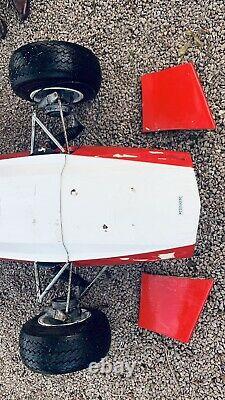 Lystonia minor single seater race car chassis number 3/14 1970 early nose design. Totally complete and original car with original 4hp engine. A lovely resto project for someone. The story of these fascinating cars all starts with Alan Mann Racing, a very well known and successful racing car team of the 1960s, based in West Byflett, Surrey, an area in those days that was a hot bed for International race car building, with the likes of McLaren and Brabham as neighbors, Alan Mann developed strong links with Ford in Detroit, having made an impression with their successful Lotus Cortinas, their cars were always immaculately prepared, reliable and fast, throughout that decade they prepared Cobras, Mustangs, Escorts, GT40s and also the ill-fated Ford F3L, although the F3L was very (slippery) fast and ahead of its time, it needed more development and Ford decided to can the project early. Towards the end of the decade they got involved in building movie set cars including Chity Chity Bang Bang, the Mustang and Aston DB5 in Goldfinger and also preparation of the Lola T70 camera car in Steve McQueens legendary LeMans film. At the start of 1970, 3 members of Alan Mann Racing, Jim Rose, Jim Morgan and Rod Manester branched out to set up JoMoRo, a concept of mass manufacturing a racing car for children, these would be, as you would expect, impeccably designed and built to the highest standards using the latest race car technology of the day. A factory was set up in Alton, Hampshire, bespoke moulds and parts were designed and engineered, the size of these cars would be 2 thirds the scale of a period F1 car of that era, they had a mild steel seem welded monocoque chassis, which was then enamelled, fully independent rose jointed suspension, bespoke coil over spring and damper units, removable fiberglass body panels, front crash hoop attached to the tub, a roll over hoop, an adjustable pedal box to suit a range of ages from 5 -10 years old, powered by a 3 horse power Aspera engine, capable of around 40-45 mph, but factory governed to 30mph. Some of these Jomoro cars have graced the garages of many a motorsport champion, Al Unser was given a Jomoro by the factory for Al Unser Jr in 1971, along with Mario Andretti for Michael Andretti, Parnelli Jones for P. J Jones and also the famous 50's and 60's Porsche racing driver Paul Ernst Strahle owned a Jomoro. The Unser Jomoro is still on display today at the Unser Racing Museum in Albuquerque, New Mexico. After the factory fire Jim Rose decided to call it a day with Jomoro Ltd, and left Rod Manester and Jim Morgan to set up a new company called Lystonia, their plan was to build a slightly larger car aimed more at the American market, the larger size would overcome the young age (10 year-old) restriction of the Jomoro and open up a larger market, so the Lystonia would be almost the same size as a formula ford, again using their Alan Mann racecar experience these cars were built to amazing standards taking technology from the F1 cars of the day, the Lystonia was more edgy in its styling and bodywork, angles similar to that of early 70s F1 cars, when examining a Lystonia closely many parts look very similar.

Having set up the new factory in Angmering, West Sussex, the company had barely got off the ground from its development stage, when the oil crisis spiked in 1973 and doomed any would be success for the new Lystonia. Only 14 examples were ever built, and some of those were pre production development cars, you can spot a number of differences between the 14 cars. Their was an early development front nose cone with side fins, before the standard (Tyrrell 005) style nose was developed, later cars had riveted monocoque tubs, some were using more powerful motorcycle engines as opposed to the lower powered lawn mower examples, most had drum brakes but some had discs brakes. In retrospect these cars (particularly with the motorcycle engines) were very quick, probably to quick for their intended purpose, but because of the quality of engineering and design of the Lystonia, it could perform well on the track at speeds over 100mph. Both the Jomoro and the Lystonia cars are amazingly engineered using competition technology and parts of the period, although very different you can see similarities in both cars, they represent the finest example of building a well thought out and engineered production race car for children.

These cars are now very hard to find, but you will see them occasionally at auctions or in museums or private collections. The item "Lystonia Minor Single Seater Race Car 1970 Chassis No3" is in sale since Wednesday, October 13, 2021.

This item is in the category "Everything Else\Other". The seller is "w9rbe2021" and is located in Malvern.

This item can be shipped to United Kingdom.